Paris has been a big influence on the interior design – it’s one of his favourite places in the world. 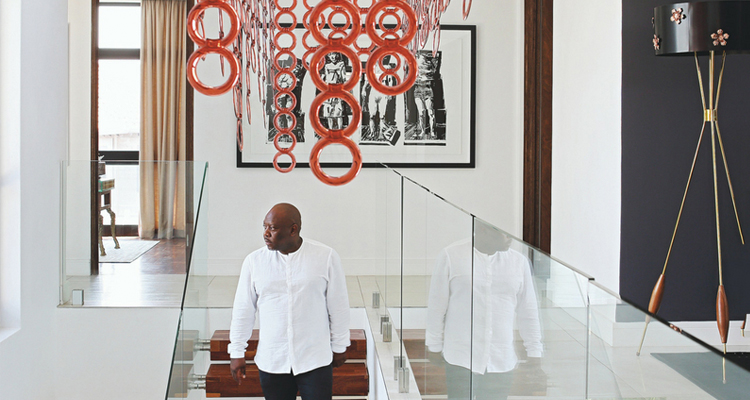 Entrepreneur Metse Phiyega is an avid traveller. It shows in the décor of his Blue Hills, Midrand home, which is designed to make him feel like he’s on holiday. The style is timeless, conceptualised to accommodate later updates in furniture and, of course, the art that decorates the walls.

Paris has been a big influence on the interior design – it’s one of his favourite places in the world. Monaco is the other. He makes a beeline for art galleries whenever he travels and is an avid collector. “I like art, sculptures, prints and oil paintings. There’s a big art scene going on in Paris. London is more on the established side but I go mostly to Belgravia and Mayfair where you find the top-end artists.”

At home in South Africa he’s a patron of the arts, especially for budding artists from August House in Johannesburg. Located within walking distance from the Maboneng, Arts on Main district, August House is the creative hub for a large group of independent, pan-African contemporary artists who work in private art studios. “I’ll often commission work based on their style from guys like Zwelethu Machepa and Colbert Mashile to help get their art out there. They’ve come up with some amazing stuff over the years.”

Phiyega also buys prints through the printing shop he co-owns, which may buy in one or two pieces of a limited-edition collection.

His favourites include sculptures by Anton Smit and Angus Taylor. Phiyega’s staircase landing features a black-and-white William Kentridge and an eye-catching piece by Setlamorago Mashile. “They’re all on display at home. Some I rotate; some I swap with friends abroad.”

He would buy art online. “I think it’s a good platform for artists to showcase their work.”

Downtown Johannesburg features “a lot of good artists, good galleries”, he adds, “while the guys in Cape Town are doing very well. There’s some exclusive stuff in the Winelands – Franschhoek and Stellenbosch – I think locally we’ve got some very talented people.”

What would he still like to own? He’s after the earlier work by Kentridge (he’s seen a few on auction at Sotheby’s in London) as well as an Irma Stern and a Gerard Sekoto. “Those are the kind of things I want to hang on the wall. And I’d really love a Pierneef.”

Phiyega may covet these pieces, and once they’re in his home find it difficult to part with them, but ever the astute businessman, he will do so for a decent price. “They’re good investment pieces. They grow in value.”

One of his other passions is jazz – bebop style, from the Miles Davis era. “I’ve got an old soul. I love the older artwork and jazz music.”

As much as he loves the music, he can’t play an instrument but Phiyega says he does enjoy seeing what swing dancers get out of it. As for dancing, he says he can. “Somewhat, to save my life, yes.”

5 Things to consider before choosing a home loan comparison service

Home loan interest rates: What you need to know in 2020

How do home loans work exactly?

The home loan makes homeownership a realistic option for those who might otherwise have perceived it as a distant dream. So how does a home loan work? Article summary A home loan is when a...
Read more
November 15, 2020

How to choose a quiet property before you buy

Peace and quiet is difficult to quantify, yet many home buyers have it as one of their main requirements. Here are some tips for choosing a quiet property. Article summary Location is the most important...
Read more

Achieve greater visibility than those anywhere else on the web. In an era where the first tour happens online, give your property the winning advantage.
More